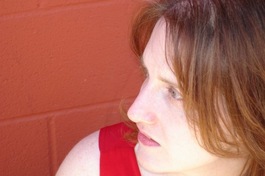 Katherine Mayberry is an actor, director, and teacher working in West Michigan.  She serves as the executive director of the Pigeon Creek Shakespeare Company, a company that she helped to found when she was an undergraduate student at Grand Valley State University.  Mayberry’s work focuses on Shakespeare and classical theatre, but she also frequently performs in contemporary pieces.  She teaches at Grand Valley State University, the Blue Lake Fine Arts Camp, and the Interlochen Shakespeare Bootcamp, and serves on the organizing committee for Grand Rapids’ Lake Effect Fringe Festival, which she helped to found in 2012.

Please do not contact Katherine about admissions to the Blue Lake Fine Arts Camp, or the Interlochen Center for the Arts Shakespeare Bootcamp.  While she serves as a Shakespeare instructor at both of these camps, she does not have any control over the admissions process.  Both of these camps have contact information for camp administration and admissions listed on their websites.

“While the set was simple (a single Ship’s wheel, curtains, and platform) and the costuming drifted between those of modern Italian civilization and magical castaway Renaissance piecemeal, it was the man-made magic of the play that kept the audience’s attention and pushed the play.

Prospero was the puppeteer of all the events of the evening and his magic (being performed through him, or his servants, or the entire cast echoing forth from corners unknown), committed, with fine timing and complete synchronization to deliver what even the most cynical brain could accept for a moment as true magic.

The usage that stuck out the most was the understood invisibility. Unlike in ‘A Midsummers Nights Dream’, where the character of Oberon so seductively tells the audience that “he is invisible, and can overhear”, our characters of Prospero and Ariel never mention their invisibility, but it was constant and accepted. Many times as Ariel performed some of the more sparkly and fiery tricks, we were aided by waves of ravaging actors in illusionary actions. But the spirit nature and invisibility of Ariel also was presented sometimes with the actors voice off-stage, or sometimes simply in Prosperos face add he received reports of events occurred.

This was only one of many prevalent uses of magic and telekinesis throughout the play. Though sometimes harshly and frighteningly, and sometimes simply hilarious, it’s constant prevalence was so well executed that it was easy to lose ones self into."

Joel Schindlbeck for The Rapidian

No lightning flashes or other pyrotechnics embellished the opening storm and shipwreck, but the whole room was caught up in the gale of actors dispersed on all sides, swaying with the wind while mariners in bright yellow raincoats held fast to the flapping sail.

Cast and audience alike were plunged onto the island where magician Prospero and his daughter Miranda have been living in exile since Prospero’s brother, Antonio, usurped Prospero’s title as Duke of Milan. With his spirit friend Ariel, Prospero has orchestrated the storm to snag a ship carrying Antonio and the King of Naples. Miranda discovers the king’s son, Ferdinand, on the beach and promptly falls in love."

“It turns out that Pigeon Creek Shakespeare can do passion and lust as well as they do comedy.

Under the direction of Katherine Mayberry, “Antony and Cleopatra” tells a story of two lovers so inflamed with desire for one another that they’d sacrifice their great empires, honor and reputation. Whereas six lives are lost to the doomed love affair of Romeo and Juliet, entire armies fall so that a great Roman general and a charismatic Egyptian queen can, in the latter stages of their life, share their bodies and their hearts."

“Determined to get revenge, Katherine Mayberry’s Tamora, queen of the Goths, soon gets her opportunity when she catches the eye of the emperor, placing her in a position of power and giving her the means to wreak havoc on Andronicus’ life and the lives of all those near and dear to him.

Mayberry’s Tamora is a woman who has learned how to survive in a male-dominated world—how to survive and to seize power. After her initial tears are shed to no avail, she changes her tactics. She plays the diplomat, she asks for favors, she appears outwardly servile while hiding a spine of iron. Only when she is certain she has the upper hand, such as in her interactions with Lavinia, does she reveal who she really is. Nor does she ever perform the acts of violence herself. She manipulates them, she approves them, but it is the men around her who perform the deeds."

“The entire ensemble tackles this French classic work with the same ease and familiarity that they do their Shakespeare productions. They embrace the physicality, show great comfort with the language, and wring the most out of the inherent comedy of the text. They are fully committed to their roles and to the story they are telling. Even in a moment where the humor overtook them and two actors broke, letting laughter get the better of them, they manage to sell the amusement as part of the story…Katherine Mayberry eats up the plum role of Dorine, maid to the daughter of the house. Her sassiness speaks truth to hypocrisy and shows no tolerance for the affectations of the day or the foolishness of her supposed betters. She is bawdy and frank, making much use of a feather duster and her highly expressive face.” —
http://www.encoremichigan.com/article.html?article=8080

“The women of this production are the driving force, the ones whose hands are on the cranks, inventing anew a framework to contain the familiar words and story. The genius in the production is Katherine Mayberry’s Lady Macbeth. Her expedition is one from cruelty to madness, with her love for her husband and ambition powering each step. She machinates. She lusts. She drives her husband to perform her will.” – See more at: http://www.encoremichigan.com/article.html?article=7276#sthash.G7nxBEnZ.dpuf

“Company director Katherine Mayberry portrayed Lear’s eldest daughter Goneril, filling her character with just the right degree of contempt and ambition. Never the slightest hiccup or hesitation, it is clear that Mayberry has been a longtime student of Shakespeare.” — http://www.mlive.com/entertainment/muskegon/index.ssf/2009/05/king_lear_cast_focused_on_shak.html

Nancy Versceuren of the Muskegon Chronicle

“There were truly some fine performances…as the catalyst of that jealously, though self-deluded by a sense of honor, Katherine Mayberry brought Caius Cassius to life. The cast as a whole was delightful in the daring and excitement they generated on the stage.”

James Kroll of the Muskegon Chronicle